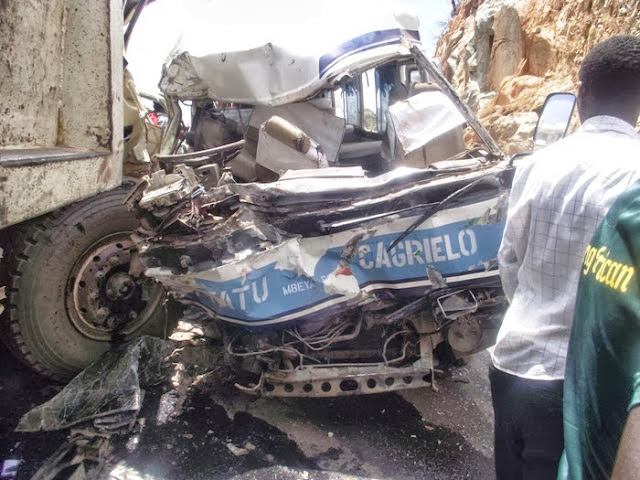 Taxi which have been involved in the accident as the scene while police were protecting passenger safety properties.

Citizens of the city of Iringa watching the crash in Mount Ipogolo.

Coaster being nyang’anyang’a after the accident which imejeruhi people over 38.

MORE than 38 passengers have been injured in an accident involving four cars in Iringa, after a Toyota Coaster bus with registration number T 960 AQY makes his journey in Iringa failure to hit the brakes and three cars.

The accident happened on Mount Ipogolo, an area famous in Iringa as “well of the bride” yesterday after Coaster put them on three cars which are truck type of Isuzu of Iringa Municipality, Tax and Hiace. Injuries 38 in the accident have been admitted to the Hospital Appeal in Iringa. Referring to the state of the casualties of the incident, in charge of Hospital Physician Referral Iringa, dr. Deogratis Beast said they had received 38 injured and admitted to a 8 with three injuries in a critical condition and that many have suffered more injuries on the head and chest, while 27 injured were allowed to return home due to lack of serious injuries.

SPEAKER OF PARLIAMENT SAYS THAT ANNA YOUNG WAGES OF MEMBERS 11 MILLION A MONTH IS VERY SMALL THUS WE HAVE OFTEN THERE’S A BAD SITUATION .

SPEAKER OF PARLIAMENT SAYS THAT ANNA YOUNG WAGES OF MEMBERS 11 MILLION A MONTH IS VERY SMALL THUS WE HAVE OFTEN THERE'S A BAD SITUATION .