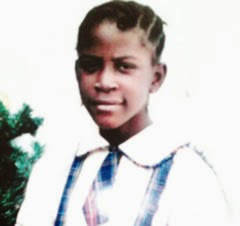 Precious Nwaigwe, the 15 year old Nigerian student who was kdinapped and sold to some pimps in Libya by her maternal cousin in connivance with some  Niger republic kidnappers has been freed and returned to Lagos. According to new reports by Punch, the maternal cousin and some suspects were arrested a while back and after much drilling and interrogation, one of the suspects, Kevin Kizito gave out a number which was called and he spoke to his accomplice, telling them to release the little girl as their game was up.

A police officer who spoke on condition of anonymity, confirmed the return of the little girl

“This Kelvin had been arrested for some time now, and he had been reluctant to release information. But he was made to undergo some serious interrogations and drillings, and afterwards, he said he should be allowed access to a phone. When he was given the phone, he called one of his people and told them to release the girl because the game was up. The girl was released from Libya and on Friday she arrived in Lagos. She was dropped off at Obalende.”the police source said

Blessing, a student of the Ikenne Community College in Ikenne Ogun state had come to Lagos to spend her holiday with her father at his home in Ajah and was on her way back to school when she was kidnapped on May 24th 2014.