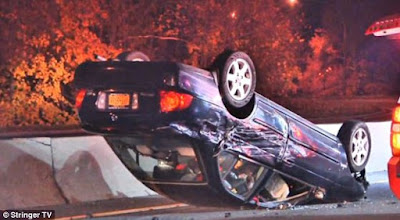 A 25-year-old mother-of-one who survived a car crash on Sunday morning has died after going back to the vehicle to grab her purse, police claim.

Brittany Leith, mother of a three-year-old girl, was left completely uninjured when her Nissan hit the center median and flipped over onto its roof on Long Island’s Southern State Parkway at 3.54am.

However, after clambering out of the wreckage through a cracked window and being helped to the roadside by other drivers, Leith went back to her car to collect her belongings.
But before cops arrived,she returned to her vehicle in the left lane to retrieve property from it, as she walked back, she was hit and instantly killed by another car on the highway. 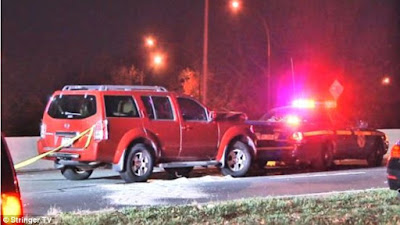 A state police car then arrived and was also struck from behind by another passing motorist. A state trooper was taken to the hospital to be treated for minor injuries.

Her 73-year-old grandmother Claire Hansen said she doesn’t know how they will break the news to Leith’s daughter.
‘We have to tell this little baby, this little doll,’ Hansen said. ‘How do we tell this little girl? . . . She keeps saying, “Where’s Mommy? Where’s Mommy?” It’s not supposed to happen this way.’
According to State Police Senior Investigator Thomas Hughes, Leith was adamant that she had to collect her belongings despite warnings from other motorists.
Source: NY Post
ADVERTISEMENT
Previous Post