by iamkrantz
in SPORTS
Reading Time: 2 mins read
A A
0
0
SHARES
0
VIEWS
Share on FacebookShare on Twitter 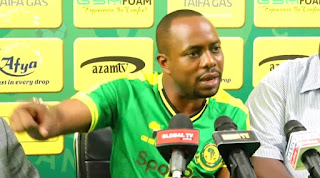 The former spoke’s person of Young Africans sports club Jerry Murro has blamed the coach Luc Eymael for poor performance of the team.
Talking early today with one among media in the country, Murro said the coach has failed to use his squad very better while he believes that if the team will remain with the assistant coach Boniface Mkwasa the team could do better.
Murro commented that Boniface Mkwasa as assistant coach is much better than Luc Eymael the head coach and for that case it is like Eymael came in Tanzania as a tourist.
On the other hand Murro lamented Young African’s leaders for poor selection of players especially international professionals.
“We didn’t select good players among the squad, even if we have an economic crisis, we could allow the team to lose among its games” Murro said.
On his view as member of Young African football club, Jerry Murro who is District commissioner at Arumeru district, commented that the club members and fans are always need their team to win than what their leaders say on their couch to get more time with the team.
Young Africans football club will play a match in the Azam Sports Federation Cup today against Gwambina footbal club from Mwanza who trade in the first Division League (FDL) in the sixteenth round at the national stadium at 07:00PM in Dar es Salaam.
The last game against Coastal Union in Tanga region, Young Africans football club didn’t win the game after a draw game of nil.
ADVERTISEMENT
Previous Post