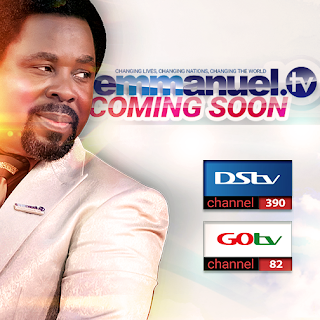 MultiChoice Africa has announced the addition of Emmanuel TV, a Christian television channel founded by T.B. Joshua, the controversial Nigerian pastor of The Synagogue, Church Of All Nations (SCOAN).
According to a press release from the popular South African brand, “The channel will air 24 hours a day, seven days a week and will bring to viewers inspirational sermons from Prophet TB Joshua alongside dramatic healings, deliverances, miracles and touching charitable projects.
Joshua’s station will launch on DStv channel 390 on Thursday 19th November 2015, as well as on GOtv channel 82.
“Emmanuel TV is currently one of the most subscribed Christian channels on YouTube with over 250,000 active subscribers and nearly two million followers on Facebook,” the statement continued.
In the cleric’s own words, “The purpose of Emmanuel TV is to preach the Good News of salvation to all mankind. That is what we are born for; that is what we are living for and that is what we shall die for. Emmanuel TV is committed to changing lives, changing nations and changing the whole world through the Gospel of our Lord Jesus Christ.”