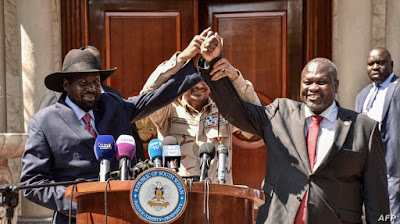 In the aftermath of TB Joshua’s historic peace mission to South Sudan on 12th November 2019, the nation’s two rival leaders have taken significant steps in the path to restore peace to the troubled nation.
“Time has come for us to put our differences behind us,” Joshua told President Salva Kiir Mayardit in a public address at the Presidential Palace, attended by government dignitaries, military personnel and thousands of South Sudanese citizens.
“This is the voice of God. Our leaders should overcome their division and agree to work together for the good of the country,” he insisted, adding that “peace has no price” and leading the nation in a heartfelt prayer for peace.
The latest development in the ongoing peace negotiations have brought renewed hope that sustainable peace is close on the horizon for the world’s youngest nation.
Last week, South Sudan’s President Salva Kiir and rebel leader Riek Machar agreed to form a transitional unity government by a February deadline even if they don’t resolve key political disputes by that time.
On Monday, the duo additionally agreed to renew face-to-face talks on all outstanding issues after the culmination of the Christmas and New Year holidays. “Dr. Machar is expected to travel to Khartoum on Tuesday, but he will come back to Juba after the holiday season,” Tut Gatluak, Presidential Advisor on Security Affairs, told reporters.
According to the presidential adviser, the two principles reaffirmed their commitment to ensure that lasting peace is achieved in South Sudan.
“President Salva Kiir Mayardit and Dr. Riek have wished the people of South Sudan a happy holiday. We want to assure the public that next year will be a year of peace and tranquillity,” he said, echoing Joshua’s declaration that 2020 would indeed be a New Year for the nation.