by iamkrantz
in INTERNATIONAL NEWS
Reading Time: 3 mins read
A A
0
0
SHARES
0
VIEWS
Share on FacebookShare on Twitter
ADVERTISEMENT 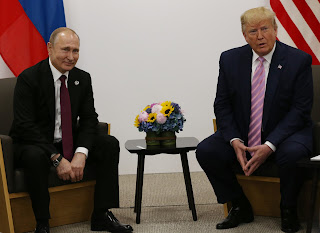 US intelligence agencies have warned that Russia is attempting to help President Donald Trump get re-elected in November, US media report.
The comments came in a closed-door briefing to the House Intelligence Committee on 13 February, officials told US outlets.
President Trump was reportedly enraged, complaining that Democrats would use the information against him.
President replaced his acting intelligence chief, Joseph Maguire, on Thursday.
The New York Times reported that Mr Trump was particularly angry that Adam Schiff, the Democrat who led the impeachment proceedings against him, was at the briefing.
Mr Maguire was a favorite to be nominated for the permanent Director of National Intelligence (DNI) post, the Washington Post said.
However, the paper said the president changed his mind when he found out about the briefing, and what he called the “disloyalty” of his staff.
The president announced this week that Mr Maguire would be replaced by Richard Grenell, the US ambassador to Germany and a Trump loyalist
ADVERTISEMENT
Previous Post

NMB Bank Launches Insurance Services At All Its Branches