by iamkrantz
in ECONOMY
Reading Time: 2 mins read
A A
0
0
SHARES
0
VIEWS
Share on FacebookShare on Twitter
ADVERTISEMENT 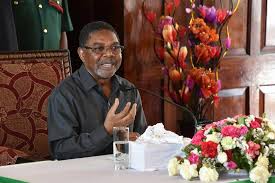 The President of Zanzibar and Chairman of the Revolutionary Council, Dr. Ally Mohamed Shein has explained his happiness after receiving the Bank of Tanzania’s report on the economic growth of Zanzibar.
Dr. Shein said yesterday at Zanzibar state house in his speech with BOT’s Governor Prof. Florens Luoga who told him on how the economy of Zanzibar is continuing to be strong.
In the explanation, Dr. Shein told the governor that “it is good news that brings economic development view in Zanzibar as we take serious efforts in strengthening our economy.”
Dr. Shein added that the achievements have reached due to the presence of good leaders and the cooperation between the government and its citizens together with the Bank of Tanzania.
On the other hand Prof. Luoga told Dr. Shein that the Inflation in the country is steady a situation which brings comfortability to the citizens.