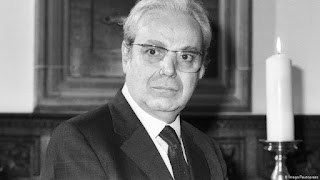 The Peruvian diplomat led the United Nations for 10 years, overseeing the Iraq-Iran war and the collapse of the Soviet Union. He died at the age of 100 in his home country, where he also served as prime minister.
Former United Nations Secretary General Javier Perez de Cuellar, who led the organization from 1981-1991, died in his native Peru on Wednesday night.
“My dad died after a complicated week. He died at 8:09 pm tonight (01:09 GMT Thursday) and is resting in peace,” Francisco Perez de Cuellarf told RPP radio.
Antonio Guterres, current head of UN wished him a happy 100th birthday on January 19.
“On this momentous occasion, we at the UN draw on his example for inspiration  and are deeply grateful for his many contributions and achievements as Secretary-General,” Guterres wrote on Twitter
ADVERTISEMENT
Previous Post

Magufuli Appoints A New Permanent Secretary In The Ministry Of Agriculture

MANARA: Let’s Fill The Stadium On Our Derby

MANARA: Let's Fill The Stadium On Our Derby