by iamkrantz
in SPORTS
Reading Time: 3 mins read
A A
0
0
SHARES
0
VIEWS
Share on FacebookShare on Twitter 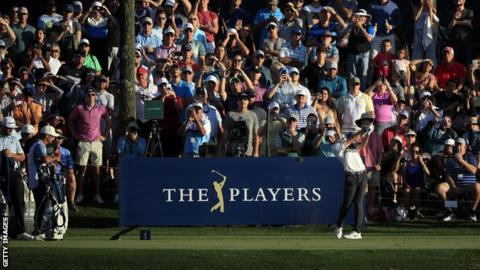 The Players Championship in Florida has cancelled after one round with organisers saying it was “the right thing to do in order to safeguard against the spread of coronavirus.
The PGA Tour has also postponed all tournaments between now and the Masters – the first major of 2020 – which is scheduled to start at Augusta National in Georgia on 9 April.
The Tour said: “At this point – and as the situation continues to rapidly change – the right thing to do for our players and our fans is to pause.”
The event, held at TPC Sawgrass, is not a major championship but is often referenced as ‘the fifth major’ given its status in the golfing calendar.
On Thursday organisers said fans would not be able to attend the prestigious course for the final three rounds of play but later they announced: “It is with regret that we are announcing the cancellation of The Players Championship.
“We have also decided to cancel all PGA Tour events – across all of our Tours – in the coming weeks, through the Valero Texas Open.
“We have pledged from the start to be responsible, thoughtful and transparent with our decision process. We did everything possible to create a safe environment for our players in order to continue the event throughout the weekend, and we were endeavouring to give our fans a much-needed respite from the current climate.”
The Players Championship was first played in 1974 and has never been cancelled
ADVERTISEMENT
Previous Post

All Uefa competitions have been postponed because of the coronavirus outbreak.

All Uefa competitions have been postponed because of the coronavirus outbreak.