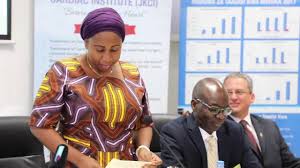 The government of Tanzania has confirmed the first case of Coronavirus today 16th March 2020.
Speaking to journalists, the Minister of Health Community Development, Gender, Elderly and Children, Ummy Mwalimu said the patient is a female Tanzanian national of 45 years old who landed from Belgium with Rwandan Air via Kilimanjaro International Airport.
Minister Ummy said the patient, prior to coming to Tanzania on March 15th 2020 visited Belgium, Sweden and Denmark before she went back to Belgium and then coming back to Tanzania.
According to Ummy Mwalimu, On arriving at KIA, the patient was tested where by the results came in as negative, however, while in her hotel room later that day, she didn’t feel well and thus decided to go to Mount Meru Hospital where the samples were taken to Dar es Salaam for further testing and the results coming in as positive.
Minister Ummy added that  the government is ensuring the disease does not spread countywide  while she asks all citizen in Tanzania to take precautions.
ADVERTISEMENT
Previous Post