by iamkrantz
in BUSINESS NEWS
Reading Time: 7 mins read
A A
0 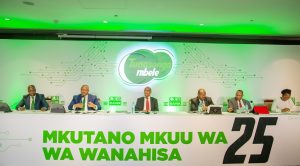 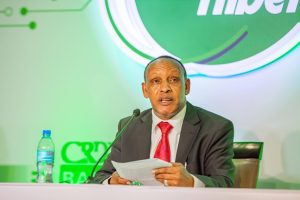 CRDB Bank Chairman of the Board, Dr. Ally Laay presenting his report for the financial year ended 31st December, 2019 to the Bank’s shareholders.
Presenting the report for the year ended December 31, 2019, CRDB Bank Chairman of the Board, Dr. Ally Laay stated the Bank and its Subsidiaries, CRDB Bank Burundi and CRDB Insurance Broker, reported a transformative growth and improved performances, in terms of higher earnings and profits, compared to what was achieved in 2018. He expressed gratitude to shareholders for joining the meeting as well as their committed support, which has made CRDB Bank wax stronger. He said, “the Board of Directors have adopted strategic initiatives that seek to provide investors with a stronger, stable and sustainable form of capital distribution so as to maximise long-term share value for shareholders whilst collaborating with the management to inculcate a high-performance culture that will yield positive returns”. Laay also announced that the group has its eye on growth prospects in new markets and is currently very well positioned to make entry into DRC. 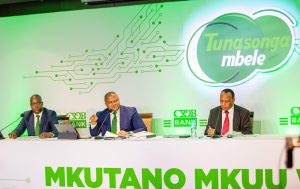 CRDB Bank Group CEO, Abdulmajid Nsekela (2nd L) addressing shareholders during the Bank’s 25th AGM which was held virtually on 27th June 2020. (R) is the Bank’s Board Chairman and Chairman of the AGM, Dr. Ally Laay and (L) is the Bank’s Chief Financial Officer, Fredrick Nshekanabo.
Speaking at the AGM, the Group CEO and Managing Director of CRDB Group Plc, Abdulmajid Nsekela, said, “our businesses continue to improve with growth in all key indicators, such as loans and advances, deposits and assets, which grew by 8% to TZS 3.4 trillion from TZS 3.1 trillion in 2018;  TZS 5.2 trillion a 11% increase and 9% to TZS 6.6 trillion, respectively. Our customer base also grew by 50% across the Group from  2 million to 3 million. Overall customer satisfaction has shown positive trends, as a result of our  transformational efforts in digitising our customer feedback routes and service touch points”.
Mr Nsekela further reported that “the Group has improved its asset quality by reducing the Non-Performing Loans (NPLs) from 8.3% to 5.5%, which is the biggest improvement, compared to an industry average currently pegged at 11%. ”
“On the innovation front, we keep soaring. In the last financial year, we have launched several innovative financing solutions for different sectors and customer segments aiming at addressing financial challenges that impede growth,” the Group CEO states.
During the year, the Group launched a Purchase Order Financing (POF) and Certificate & Invoice Discounting for contractors and suppliers; and Safari Car loans for tour operators to provide quick access to the much-needed capital to spur growth of the sector. The Group also introduced a digital lending solution named Boom Advance to support qualifying university and college students, especially for the period before their loans are disbursed by the Higher Education Students Loans Board. Besides, it launched Jiwezeshe, a credit facility for microentrepreneurs (machinga), aimed at providing cheap loans to empower them to boost their businesses. 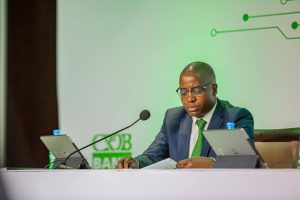 Speaking on the Group earnings, Frederick Nshekenabo, CRDB Bank’s Group Chief Finance Officer (CFO) said, “Our earnings remained strong with the Group expanding its overall market share in Tanzania to slightly above 20%,” Nshekanabo quips. The CFO further notes that the Group’s Return on Equity (ROE) improved near-double to 14.7%, a rate higher than the industry average currently at 8% and that the Bank’s Net Interest income grew 19% to TZS 526 billion, driven by retail loans, investment in government securities and reduced funding costs. Non-Interest Income grew by 15% to TZS 253 billion.
CRDB Bank Group also comprises of CRDB Bank Insurance Brokerage Ltd and CRDB Bank Burundi SA, which is the first overseas subsidiary in the neighbouring state of Burundi, a part of the Regional Expansion plan in East Africa. CRDB Bank Burundi SA Profit After Tax (PAT) jumped 146% to TZS 6.4 billion buoyed by growth in customer deposits and improved earnings from government securities. This is the highest ever profit that the subsidiary has posted since it was established in 2012. CRDB Insurance Brokers Limited, a top-tier insurance brokerage service provider, recorded a 17% growth in PAT to TZS1.5 billion from TZS 1.3 billion announced in 2018. Total income generated by the insurance subsidiary stood at TZS 7.8 billion representing 26% growth, compared to TZS 6.2 billion reported in the previous year. The growth was mainly driven by a rise in the uptake of insurance products mainly in medical care, education and tourism.
Shareholders in attendance commended CRDB Group’s Board of Directors for the decision to go ahead with the AGM by virtual means reiterating that it was a proof of the bank’s preparedness and agility. Members also elected Prof. Neema Munisi Mori and Ms. Miranda Naiman Mpogolo, as  The meeting further served to appoint Ernst & Young as the External Auditors of the Company.
On his part, Mr Mchiwa Madumba Chedego, one of the shareholders, said, “I applaud CRDB for their innovative approach and convening power. The virtual AGM has been a testament to the bank’s innovation drive that enhances our banking experiences and should become a common AGM practice to ensure stakeholder access from anywhere in the world. The Group has also performed very well in the financial year ended December 31, 2019. The result is encouraging, and the dividend is growing. We urge the Board, Management and Staff to continue in this positive direction. We look forward to seeing more value and gains this year”. Ubiquity

Nsekela commended the Government of Tanzania for its efforts to curb the novel coronavirus in Tanzania and assured stakeholders that despite the COVID-19 challenges in the first half of the year, the group remains resilient, dynamic and focused on delivering competitive returns and strengthening customers’ trust.  Adding that, “2020 will see more substantial first mover innovative approaches borne out of CRDB with a number of the financial institution’s digital initiatives also coming of age.
I am so proud to witness the YoY growth of our key performance indicators stay in the green! We will continue to move forward by distinguishing ourselves through digital transformation, innovation and delivery of exceptional offerings for the greater satisfaction of our customers and shareholders,” Nsekela Asserted.
ADVERTISEMENT
Previous Post