by iamkrantz
in SPORTS
Reading Time: 2 mins read
A A
0
0
SHARES
0
VIEWS
Share on FacebookShare on Twitter
ADVERTISEMENT 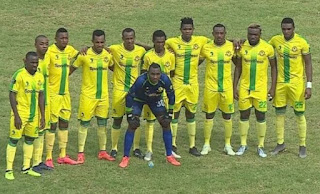 Officials of Young Africans Sports Club have denied allegations that there is a division in salary payments to their first team players.
The allegation comes after the rumors were spread via social media claiming that there are players in the team who are paid their salaries by the club while others are paid by GSM Group, a company sponsoring the team.
According to the club’s spokesperson, Hassan Bumbuli, the said rumors that spread yesterday via social media was ‘fake news’.
According to him, all players as well club officials have been paid their salaries. Bumbuli went on to suggest that, the reported rumor was ‘may be’ aimed to confuse fans and supporters especially as preparations for a derby encounter against rivals Simba Sports Club nears.
Young Africans Sports Club is currently  in Tanga as they are preparing for a Vodacom premier league encounter against hosts Costal Union, a match set for Sunday at Mkwakwani Stadium.
ADVERTISEMENT
Previous Post

Kalemani Orders The Constructor To Complete Zuzu Substaion In Dodoma

Kalemani Orders The Constructor To Complete Zuzu Substaion In Dodoma