by iamkrantz
in INTERNATIONAL NEWS
Reading Time: 2 mins read
A A
0
0
SHARES
0
VIEWS
Share on FacebookShare on Twitter
ADVERTISEMENT 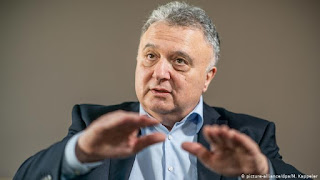 Israel’s top diplomat in Germany ambassador Jeremy Issacharoff has urged Jews, Muslims and other religious minorities to display signs of their faith.
Ambassador Issacharoff warned that Germany is losing its grip on democracy in the wake of recent terror attacks.
Following anti-Semitic and anti-Muslim attacks in Halle and Hanau, Issacharoff said  “No democratic society can survive if minorities are constantly threatened or harmed”
Issacharoff added that “An open society can tolerate many things, but never violence. People are starting to act violently against minorities, against Jews and Muslims again.”
The ambassador also appealed to Jews and Muslims not to hide their religious affiliation.
“More security for every kind of community in Germany cannot be achieved by people hiding their identity, their religion,” said the Israeli ambassador, who has been living in Germany for two and a half years.
“Not wearing a kippa or Muslim headgear would also mean hiding the problem. We have to protect everyone, stem terrorism and hatred, and maintain an open society where we can celebrate our diversity.”
ADVERTISEMENT
Previous Post