by iamkrantz
in NEWS
Reading Time: 3 mins read
A A
0
0
SHARES
0
VIEWS
Share on FacebookShare on Twitter
ADVERTISEMENT 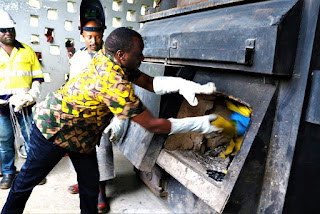 More than 30 tones of plastic carrier bags will be burned in Songwe region to implement the government order.
Those bags have been gathered in the Southern Highland regions including Songwe, Mbeya, Iringa and Njombe.
Representing Songwe regional commissioner, the Regional Administrative Secretary (RAS) David Kafulila, has launched a campaign to burn plastic carrier bags whereby nine tones among the 31 tones have burned in the garbage burner at Shanta new Luika gold mine in Songwe.
Kafulila said apart from health impacts like cancer disease, plastic waste enters in the water sources and make the world to lose 2.5 trillion dollars and according to research, the waste may led to land destruction
Kafulila has insisted that “Songwe region will continue to supervise and implementing the order of the government on environmental preservation, all local governments starting to villages, district councils and the region should cooperate together in making sure that we preserve our environment for ourselves and the next generation”
On the side of The National Environment Management Council’s (NEMC) Manager in the southern highland, Anorld Mapinduzi said the order to prohibit the use of carrier plastic bags has started to be implemented on June 1st 2019 while alternative bags that have accepted by TBS have produced to replace the illegal bags.
Mapinduzi added that majorities should not be tricked by unscrupulous business people that the banned carrier bags have allowed to be used.