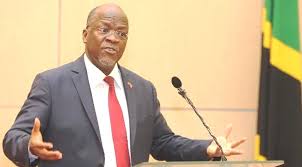 The President of Tanzania Dr. John Magufuli has paid sh38m out of sh40m as a fine aimed for the release of Peter Msigwa,  the CHADEMA Member of Parliament for Iringa Urban constituency who was convicted by the court earlier this week.
Peter Msigwa is among other eight CHADEMA officials who were found guilty after an allegation in sedition, incitement and organizing an illegal demonstration.
According to the Director of Presidential Communications, Gerson Msigwa, President Magufuli is Peter Msigwa’s relative and therefore the president has paid sh.38m after other family members managed to collect only sh2m.
Gerson Msigwa told journalists at the Segerea Prison that president Magufuli has decided to pay for the release of Peter Msigwa as his relative.
There are conflicting reports that before the president’s contribution, CHADEMA through its fundraising campaign had already paid for the release of Msigwa and other two party leaders, Salum Mwalim and John Mnyika.
Earlier in the day, CHADEMA’s three MPs Halima Mdee, Ester Bulaya and Esther Matiko were released after their sh100m fines were paid.
ADVERTISEMENT
Previous Post

DPP To Deal With Lema On Allegation To Spread False News